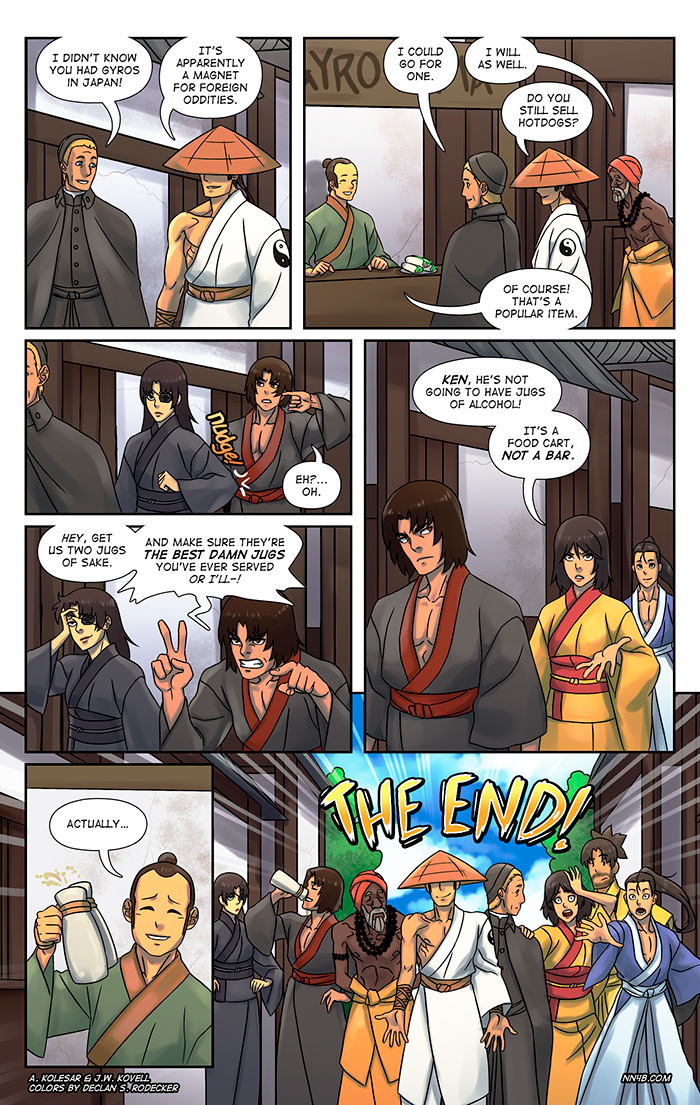 WOW, IT’S REALLY THE END! We started posting the comic OFFICIALLY in 2002 (although I actually started drawing it in 2001), and now, a mere 18 years later, it’s finished! For anyone blanking on the significance of this last page, here’s a helpful reminder link! Just took a little time to pay that gag off. Although, I mean, technically they didn’t walk INTO a bar, so probably nothing terrible happened and it was all good!

And as promised, we recorded an NN4B Final Thoughts and FAQs podcast, which you can listen to below. It’s chock full of our thoughts on the comic, many of our cut ideas, our creative process, and our future plans, as we answer your questions!

We’ll be happy to answer any follow up questions you might have in the comments section as well. The site and the comic will remain up and archived for repeated readings. I still plan to go through and clean the blurry pages in the archive over time. I intend to throw up blog posts now and again, so feel free to check back on occasion! In the mean time, I intend to practice my art craft and increase my skill level! I’ll be posting my progress on my tumblr account. I also intend to wipe clean my old Deviant Art account, which I have not updated in literal years, and start fresh. As for Joe, well, we’ve got plenty of future plans that we talk about in the podcast!

So that’s basically a wrap, we have completed No Need for Bushido’s endgame! SPEAKING OF ENDGAME…

I’m actually writing this just after getting back from an emotional viewing of Avengers: Endgame. My quick take? It’s great! I mean it’s been getting near universal praise, and that’s well deserved. Unless, of course, you haven’t been watching the other Marvel films. Then it’s just a bunch of wacky nonsense!

And when I say this was an emotional viewing, that’s no exaggeration, I cried at least three times in the movie, probably more. Granted, I’ll cry at any movie with an emotionally powerful score accompanied by half competent characterization, and Endgame was way beyond competent.

The screenplay is so tightly written, similar to Infinity War, and it’s incredible how the movie never drags over its THREE HOUR RUN TIME, yet still manages to slow down for big emotional moments. The soundtrack’s definitely doing some heavy emotional lifting, as Alan Silvestri’s one of the great composers of our time. And although there were a few moments where I can vaguely recall the jokes conflicting with the drama, there’s not enough that I can recall any glaring examples. I love how layered the movie is with references to all the previous films, so the more obsessively invested in the franchise you are, the more gags and easter eggs you’ll be drowning in. It’s going to be great for subsequent viewing! I’m not sure there’s much more I can say about the movie that hasn’t been said that isn’t, like, super spoilery, so maybe some SPOILERS from here on.

Let me just say, WOW, the time travel is great in this! I love a good time travel narrative, and Endgame is top tier. Like, they establish the rules of alternate universe time lines and they really stick to it, and I never found myself super frustrated by glaring contradictions. Although Joe did point out that if the Ancient One (Tilda Swinton) was only interested in protecting her own universe timeline, it doesn’t make much sense why hearing that Doctor Strange willingly gave up the Time Stone in Banner’s timeline would convince her that giving up her own stone would be okay. There’s no guarantee that Strange wasn’t just considering protecting his own universe, as she is only protecting her’s. But Joe also pointed out that she might have been on the fence and just felt like it was worth trusting future alternate Strange and Banner, which is fine, people are allowed to trust other people.

There’s also the bit at the end with old Steve on the bench. The scene implies that after he traveled to the past, he lived out the rest of his life and then just came back to the meeting area knowing they would be there to send the young version of himself away. And yet the movie established pretty clearly that the time periods they visit were part of an alternate universe timeline, and messing with the past wouldn’t affect their origin timeline. So theoretically, when Cap was sent back to return the stones, he actually wasn’t living in the past of the same timeline that Bucky, Falcon, and Hulk were currently occupying, but an alternate universe. So how did his older self get to that bench to hand off his shield to Falcon?

But it’s possible that after Steve finished living out his life with alt-universe Peggy Carter, he may have returned to the origin universe shortly before the group showed up at the time pad to send his younger self back, and waited on the bench just off screen until the group noticed him. Thus, the time travel rules established in the movie weren’t necessarily broken. Of course, he could’ve just come back when they expected him too, except he would’ve been gone sixty years instead of a couple hours. But that wouldn’t have been as emotional or dramatic, I guess! Also, like, good thing they didn’t notice him on the bench earlier, or the whole dramatic reveal would’ve been spoiled! Maybe he was hiding behind a bush until the right moment.

In terms of actual criticism of the movie, I have very little! I do think the final battle’s action sequences were a tad difficult to follow because of all the shaky cams and quick cuts. I wish every Marvel movie had fight scenes as awesome as Winter Soldier’s. I also continue to have a problem with all the cartoony physics, these characters can survive pretty much any amount of explosive trauma and blunt force damage (except when falling off cliffs onto concrete slabs). But it’s kind of a problem with most modern films that often robs action scenes of a lot of tension, so I won’t ding Endgame too hard for it, especially since swords still seem to work pretty effectively in the MCU, and I like swords, if you haven’t heard.

Also, I’m glad Thanos realized how, like, super dumb his original plan was and just went with a much better plan the second time around, but I still wish one of the supposedly brilliant Avengers characters had pointed out the obvious flaw in how wiping out half of all life in the universe  wouldn’t, like, actually solve a supposed lack of resources and end all war or whatever? Anyway, Endgame, A++. 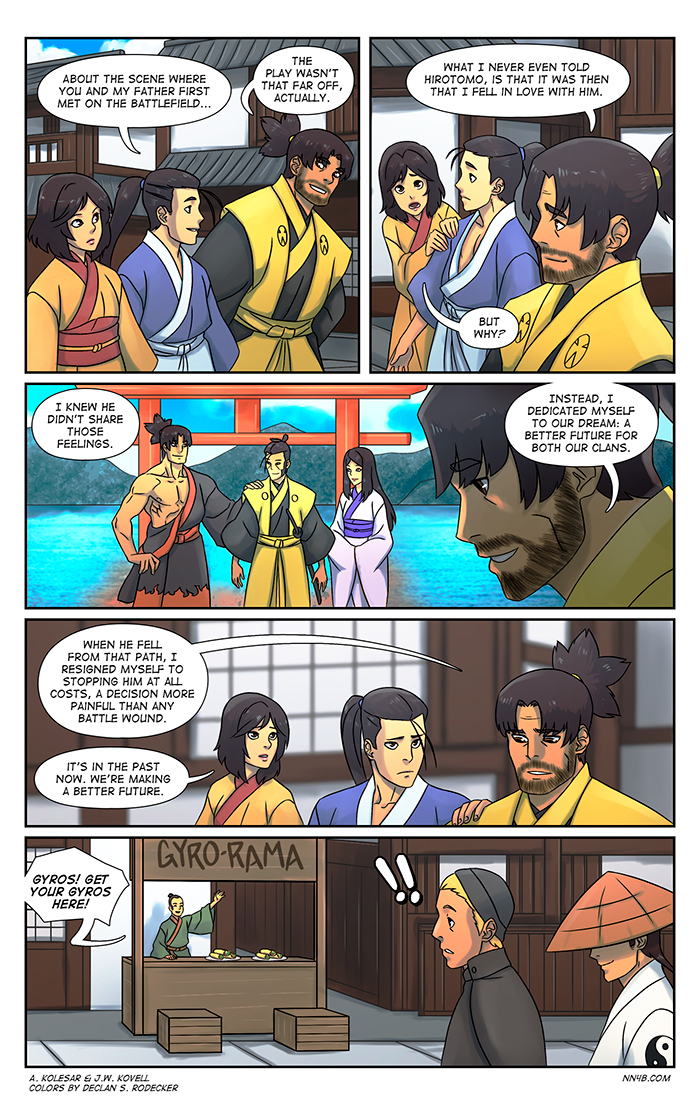