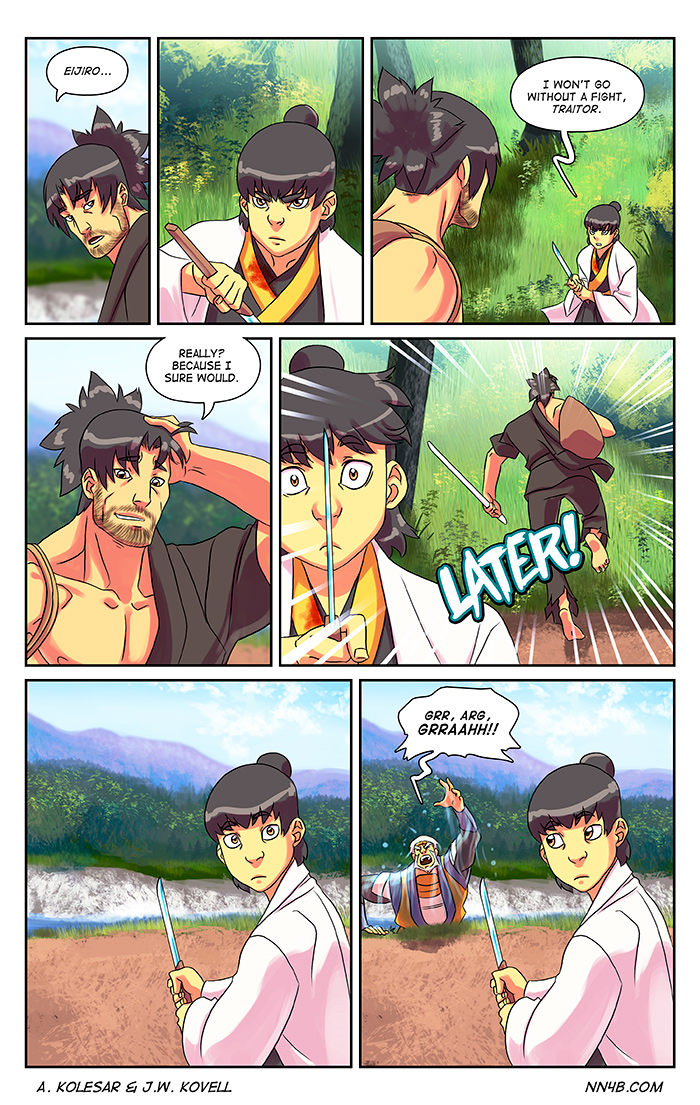 Genchu doesn’t kill children, unlike Anakin Skywalker! Also, on a new note, the pages we post moving forward will be 700px wide instead of 600px, which lets me show off the art a little more!

I liked the Force Awakens, I would probably rate it my third favorite Star Wars film after Empire and New Hope, but we’ll see how it holds up on repeated viewings. What I liked most was the affability and chemistry of the new cast, Rey, Finn, and Poe are really likable! Even Kylo Ren, despite murdering his father, comes off as a sad puppy that needs a hug, albeit one who would cut your head off if you made him angry. The movie is a Star Wars film for the internet age. Several parts made me go “THINK OF THE MEMES!!!” I can’t wait to see all the Kylo Ren hissy fit skits and comics, or the inevitable flood of “THAT’S NOT HOW THE FORCE WORKS!” animated gifs. I laughed, smiled, and had a great time through the whole darn film! BUUUUUUUT, being a life long Star Wars fan and obnoxiously critical thinker, I saw some problems with this movie! I just wanted everyone to know that I really enjoyed it before I go on my inevitably long, whiny rant!

Perhaps one of my biggest disappointments with this film is the soundtrack. Maybe it will grow on me, but this movie did not deliver any new memorable themes. It’s a bummer, because each trailer leading up to the film had a custom score by John Williams, and they all used the classic trilogy themes to great effect. But, in the actual film, instead of just giving us the Imperial March to accompany the First Order, we get, I dunno, something I certainly can’t recall. Since there’s so much fan service in this film already, why not just give us our classic themes in full thundering force (pun intended)! Blast us with the Force theme when Poe makes his trench run, make us shiver with Yoda’s theme when the CG lady with big glasses starts spouting wise advice. Hit us with that Imperial March when the First Order is all gathered together. We all want it, just GIVE IT TO US!! Or at least give us new and exciting, memorable themes! I LOOOOVE John Williams, he even did stellar work on the Prequel trilogy. But Force Awakens’ soundtrack is disappointingly subdued and unmemorable.

In a film where the vast majority of aliens are practical effects, why did they make the alien character with the largest part in the film, namely the short orange lady with big glasses, a CG creature? It bummed me out! I didn’t dislike her character, even though there’s no explanation as to who she is or what she knows or why we should consider her an authority on anything other than that she’s old, but it took me out of the film a bit when this little orange CG lady showed up in a room filled with practical effects creatures and characters.

Leia hugs Han goodbye, Leia later hugs Rey in bittersweet reunion. Leia’s super into hugs! I dunno, all the hugging felt a little saccharine. When I went to remember what Leia did in this movie, hugs were all that came to mind!!

I’m not opposed to Han getting deaded by his emo son. It’s compelling and sad and cool all at the same time, but now we’ll never see Han and Luke reunite, and that sucks!

Luke’s ‘plan’ for going into exile makes about as much sense as his ‘plan’ for busting Han out of carbonite. Either Luke wants to be found, so he left a map that both his allies and enemies could find, or he doesn’t want to be found, at which point he picked a really lousy hiding spot that could be easily located on a map that he left with some friends in hopes they’d never show anyone. Listen, Luke! Either don’t leave a map, or give the map to Leia and say “come find me when this or that particular event happens”. Maybe Luke’s ‘Map Plan’ will be explained in Episode 8, but something tells me the whole ‘Find the Map’ macguffin won’t get an explanation. Heck, if R2D2 had the second part of the map and was staying shut down to hide it, why did he reactivate to reveal it at the end of the movie? R2 was just like “Oh, are we getting to the end? Better give them the rest of the map so Luke can make his teaser cameo!”

The Millenium Falcon is GODS DAMN INDESTRUCTIBLE. It bounces off the ground and other ships like a bumper car. It maneuvers as if it’s a TIE Fighter, despite being, like, an 80 year old freighter (110 in the original EU). Even if it is modified, considering it was done so on a scoundrel’s budget, I have to wonder why every ship in the universe isn’t as equally indestructible and maneuverable. Or maybe they all are, I dunno.

The whole sequence on the freighter with the Guardians of the Galaxy rejects confronting Han, and then getting assaulted by giant CG squids felt kind of out of place to me. I kept wondering if they could’ve used that screen time for some more character banter and plot clarification. Maybe that would’ve been boring, but I like these characters so much that I just wanted to see them spend more time talking to each other instead of watching slapstick action! The physics of this movie sometimes get very slapstick and cartoony and I do not like it, but that’s just how these types of big budget effects films roll, so even though it messes with the tone of the film, I guess I just have to deal with it.

DID THEY BLOW UP CORUSCANT?? We see the Starkiller fire five shots that blow up five planets, one of which kind of, but maybe not quite, looks like Coruscant. If it was, well, they sure didn’t spend much time emphasizing how big a deal it is to blow up such a storied planet in the franchise! At least the loss of Vulcan in the Star Trek reboot felt like a big deal. Also, the members of The Resistance are able to SEE the five planets get blown up when they look into the sky. Are all of these planets in the same solar system? I find that hard to believe! I think this is another case of JJ Abrams not knowing how SPACE works. Kind of like that time Old Spock was able to look up in the sky and see Vulcan being destroyed despite being stuck on what was supposedly a far away remote ice world. And another thing, why did the First Order even blow up these planets? I may have missed some dialog about the First Order wanting to take out the New Republic Senate, but even so, it was certainly glossed over. When Alderaan got destroyed, at least I knew what Alderaan was and why it was getting blown up! And one more thing, if the First Order is not as big and powerful as the old galaxy spanning Galactic Empire, then how did they manage to make a waaaay larger and more complicated weapon than the Death Star?

C3PO’s design looked kinda terrible up close. He had this ugly matte finish instead of being a shiny metallic gold. There was also this one particular shot of R2D2 where 3PO was just behind him. It clearly showed a close up of 3PO’s wire exposed midriff, except it didn’t look like wires, it looked like a black body suit with a couple wires taped to it. I can’t believe I’m saying this but C3PO looked better in the prequels.

Supreme Emperor Snoke is a stupid main villain. Firstly, he’s a dumb CG cartoon man. Secondly, he looks like Voldemort. Thirdly, his name is SNOKE. Forthly, he’s not mysteriously cloaked in shadows like the Emperor was, he’s just some guy with an ugly face. He does not do or say anything that comes off as intimidating. If he’s going to be our main baddie moving forward, I hope they replace him with a guy in makeup and give him a more looming presence.

I wish they’d just revealed Rey’s past to us in this movie. I know they want to hold on to it so it can be a big reveal in Episode 8 or maybe even 9, but it causes me to ask so many questions about what’s motivating her and why she does the things she does. Clearly she knows about the Force, and has some idea of its capabilities. Maybe she received some rudimentary training when she was 8 years old or something because I find it hard to swallow that she just naturally KNEW how to do a Force Mind Trick or pull the lightsaber to her. I won’t say that I wasn’t emotionally invested in her story, because I totally was, but it would’ve made a world of difference if I’d known exactly where she was coming from. I suppose there’s always subsequent viewings after the sequels have revealed that information. But, by contrast, in A New Hope, we knew what Luke’s life had been like up to that point, which helped us understand his motivations and how crazy the events of the first film really were for him. Also, I might as well say I’d have liked more of Finn’s history revealed, too. Maybe instead of fighting squids on the freighter, Finn and Rey could’ve shared their pasts with each other, further cementing their bond and helping the audience understand them more.

So I think that covers all my complaints about The Force Awakens (also that title means what again? Is it referring to Rey’s awakning Force abilities? I vaguely recall dialog mentioning something about the Force awakening). I just want to mention again that I did greatly enjoy it despite all the problems I listed. The film’s characters had a lot of heart and plenty of great moments and fun dialog! That goes a long way to allowing me to forgive a wishy washy plot that requires some Jedi mind tricks to make sense of. If any one has a defense, explanation, or clarification for any of the points I brought up, feel free to let me know! I have, admittedly, only seen the film once at this point, and may have missed some exposition. 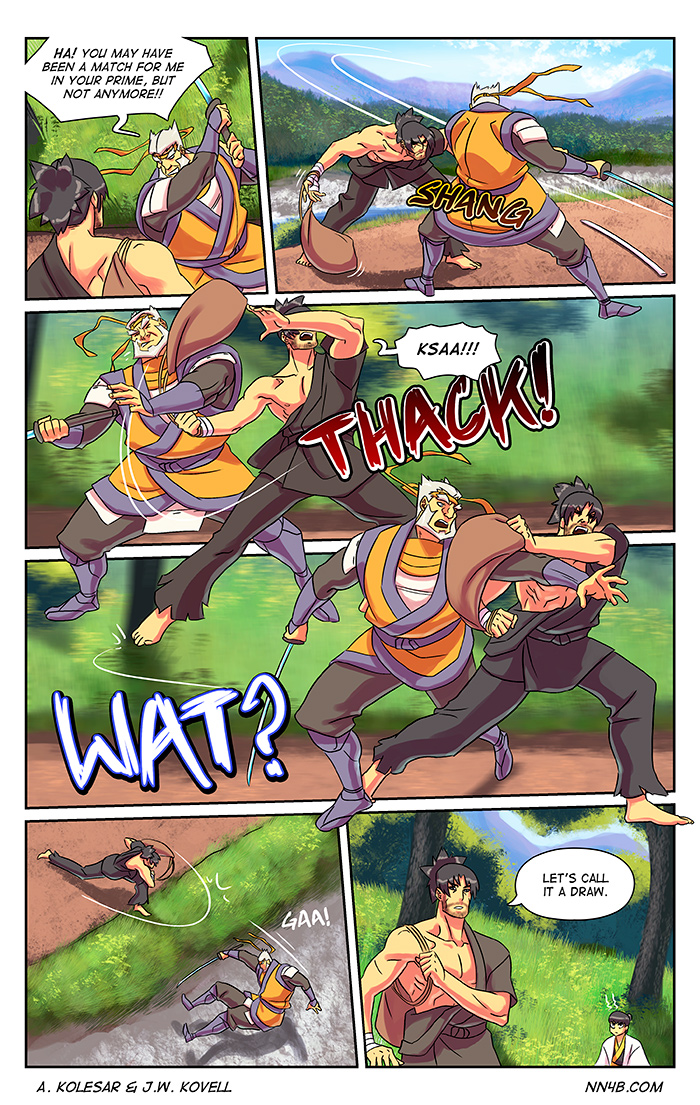