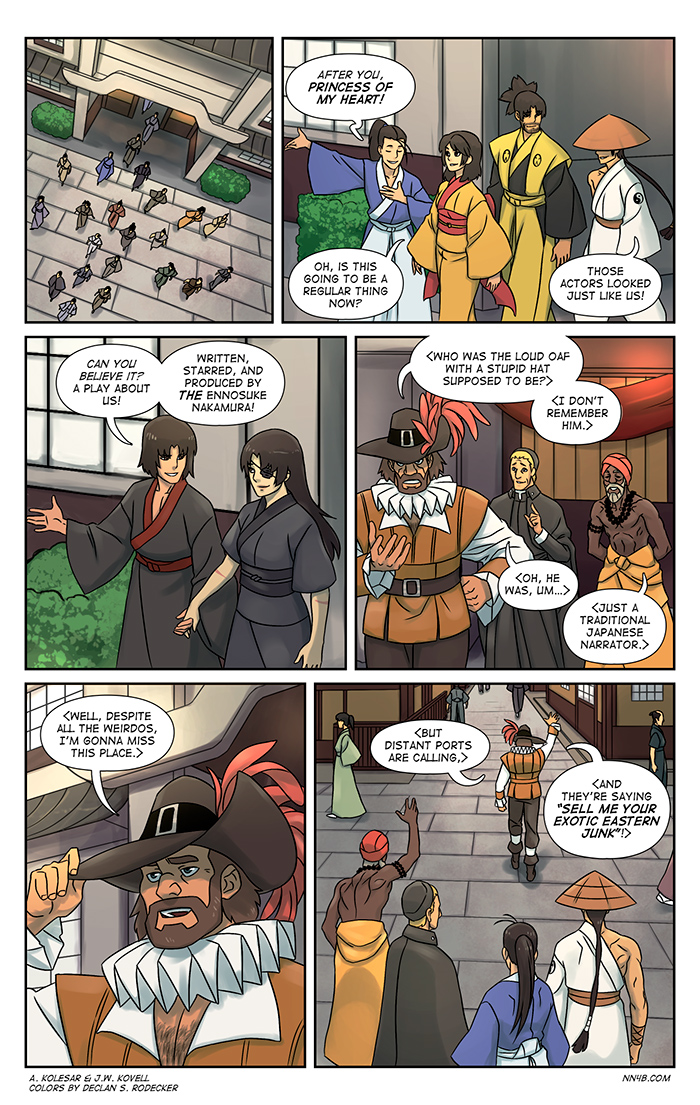 Much like Ricardo, I, too, will miss all the weirdos we met along the way.

So this may be the last time I talk about Star Wars under an NN4B page! Might as well make it count. 2019’s Star Wars Celebration brought us three big SW trailers, the first being the teaser for Ep 9. Rise of Skywalker.

It’s basically firing on all nostalgia cylinders. I love this trailer, as I have loved every Star Wars trailer since The Phantom Menace! I still occasionally pull up youtube and rewatch all the Star Wars trailers from time to time and remember how excited I was for each subsequent film. I’m just gonna lay out some of my thoughts on the contents of this one:

The Rey vs TIE sequence takes up the majority of the trailer, and it’s pretty neat. But considering the TIE fighter (presumably piloted by Kylo) isn’t shooting at her, and she doesn’t appear to be swinging at it when she jumps, I suspect this running sequence is her calling a TIE Uber, and not her trying to sword it to death. Another uneasy alliance between Rey and Kylo?

I am kind of disappointed that Rey somehow completely and improbably fixed Luke’s old saber. Like, it EXPLODED in the last film, and it fell into a super gas giant in Empire Strikes Back. This thing’s as immortal as the Millennium Falcon. I’m amused with how much gravitas it’s been given since Anakin only ever seemed to treat sabers as disposable tools. Well, I suppose it meant more to Luke anyway. I would’ve loved to see a new color when she ignited the blade. Maybe orange, yellow, or just pure white, to indicate she’d rebuilt it and made it her own. Kinda lame we’re still stuck with classic sky blue.

A-wings are back! And Y-wings, based on the leaked poster art from a couple weeks ago. No B-wings though? I want the complete alphabet!

Kylo rebuilds his Vader-wannabe helmet! I was a big fan of the helmet, although I love in TLJ when Snoke tells him to take the thing off because it’s silly, basically confirming that Kylo only wears it because he thinks it looks cool. Clearly, with its reconstruction, Kylo’s embraced his true fanboyism, thus completing his fall to the Dark Side. Although the helmet’s return does make one wonder if JJ is trying to rewind the clock on Rian Johnson’s story decisions in TLJ. Hopefully they won’t retcon Rey’s parents being scumbags who sold her for drinking money and then died in a pauper’s grave. It’s legit my favorite thing about TLJ (that and Luke calling out the prequels as super awful).

Lando’s been reunited with his long lost love. L3-37 (or at least her navigation unit)! Unlike Harrison Ford, Billy Dee’s been pretty happy to jump back into his Lando roll on and off over the years. He had a cameo on Star Wars Rebels (although, ugh, it was a really bad episode where everyone acts out of character for no reason). Anyway, I’m glad to see him back in actionOH WAIT ARE THEY GONNA KILL LANDO IN THIS ONE???

We see presumably Leia holding the A New Hope medal that Luke and Han (BUT NOT CHEWIE) were awarded on Yavin 4. Keep punching those nostalgia buttons, JJ!

So we’ve got the main cast overlooking part of the Death Star on some planet. One has to presume it’s the second Death Star’s remains, mostly because it’s accompanied by the Emperor’s laughter, and we never saw Palpatine on DS1 (in the films and the new canon, at least). So maybe we’ll visit Endor again! It would be the first time in these new films that we return to a location from the previous two trilogies (oh, well, I guess we went to Yavin 4 in Rogue One). Or maybe JJ will handwave  cosmic distances (as he’s want to do) and say that the 2nd Death Star’s remains fell onto a different planet near Endor. I mean, technically the Ewoks live on the Forest Moon of Endor, meaning there is a larger planet called Endor that the forest moon orbits around, although I can find literally no information on said Planet Endor. But apparently there are two Endorian suns in the Endor system, named Endor 1 and Endor 2. Okay, this is pretty confusing…

Palpatine lives? He certainly laughs. And Ian McDiarmid did appear at the trailer reveal at Star Wars Celebration. One has to assume the Emperor was pretty definitively dead at the end of RotJ (I mean, he exploded), and it’s also been 30+ years canonically since then, and he was already a pretty old  looking dude. So My assumption is that we’re gonna have a whole buncha Force Ghosts in Episode 9, or a pretty wild flashback sequence. Thanks to TLJ, both flashbacks AND Force Ghosts are now fair game in Disney films.

The music in the trailer is the biggest, grandest possible version of Princess Leia’s theme to date, gives me chills.

I think the meaning behind the film’s title, Rise of Skywalker, is going to be about turning the name Skywalker into a job description of sorts, similar to Jedi. Luke’s take on the Force is ultimately one that rejects the dumb teachings of the Jedi in the prequels (and even to a degree in the original trilogy, as he rejects killing his father despite Yoda and Obiwan wanting him to kill Vader). So maybe to be a Skywalker is to be a new type of Jedi or Force User, or even just regular person, who works to bring peace and justice to the galaxy, which is honestly what Jedi should’ve been from the beginning, but subsequent sequels kinda ruined that. So maybe Rise of Skywalker is the rise of a new order of Jedi known as Skywalkers (although I wouldn’t presume Disney would reduce the use of the term Jedi, as it’s super iconic and pop culture relevant, and a big part of that $4.05 billion they paid Lucas to own).

On to the next trailer! The leaked teaser trailer for The Mandalorian (an official version hasn’t gone up yet).

I don’t have much to say about this show other than I like the people involved in it, and I like that it will be structured as episodic storytelling with different writers and directors each episode. It’s clearly got a massive budget, and I think it’ll finally give us the Star Wars stories disconnected from the mainline films that we’ve all been wanting, especially considering the sidestory movies can’t seem to stop just being more prequels to the numbered films. Anyway, I’m excited for this! Granted I’m pretty much always excited for anything Star Wars until it actually comes out!

And finally, we have the trailer for Jedi: Fallen Order. The third high profile Star Wars game to be produced by EA, who’s owned exclusive rights to making all Star Wars games since 2015. Now, for a little background info on why this game is a “BIG DEAL”.

For those not in the know, ever since EA was awarded the Star Wars games exclusivity deal with Disney, they’ve only produced two games; Star Wars Battlefront, and its sequel, Battlefront 2. There are a lot of reasons only two games have been produced, a big one being because EA forces its developer studios to work with the unwieldy, EA owned Frostbite game engine, which has resulted in at least two cancelled Star Wars games, and the demise of Visceral Games. Luckily, Respawn Entertainment, the EA owned developer of Jedi: Fallen Order, is run by Vince Zampella, a game producing guru who has no intention of taking any of EA’s crap. He required that Fallen Order be produced using the much more beloved and user friendly Unreal Engine 4 instead of the maligned Frostbite engine. And the results are pretty clear from the trailer, which is supposedly using the in-game graphics engine. It looks incredible. The actual story being sold by the trailer, though, I am less enthralled by.

Remember in X-Men Apocalypse where Magneto is in hiding, working as a regular guy at some sort of construction site in Poland, and he uses his metal bending to save a construction worker from a fatal accident? And because he saved the guy, he’s outed as a mutant and the police hunt him?

That’s this trailer, except replace Michael Fassbender with a whiny 20 year old. Not to disparage too much, just that my immediate reaction to the main character is that he’s not terribly charismatic. I have the same problem with Starkiller (not the Base) in the Force Unleashed games. Hopefully this new character doesn’t spend the whole game feeling sorry for himself “Woe is me for being a Jedi in these dark times!”

Also, much like Starkiller from Unleashed, one has to assume this character is pretty much fated to die or go into a looong seclusion to avoid conflicting with Luke’s journey.

Also, when this new character gets a blade at the end of the trailer, it’s ANOTHER blue lightsaber? Sigh! before the prequels, the old Expanded Universe had basically made lightsaber crystals all the colors of the rainbow. Then, I dunno why, Lucas insisted that all lightsabers were only the three colors that were featured in the OT (thanks gods he made an exception for Sam Jackson’s purple blade request). I’d love to see more saber colors introduced into the new canon. Seems like a great merchandise marketing opportunity, if for no other reason!

Having said all that, I’m really excited for Jedi: Fallen Order because it will be exclusively a Single Player campaign game, and will have NO microtransactions, which is quite novel nowadays, especially coming from EA, who is often pushing multiplayer, loot grinding games. Pretty certain the lack of microtransactions was another Zampella requirement to make the game.

PHEW, thems all my thoughts on Star Wars! (well, okay, that’s barely the tip of the iceburg, but this is already a crazy long blog post.) Did anyone actually read the whole thing? Feel free to share your own thoughts so we can get into long, rambling conversation threads in the comments. 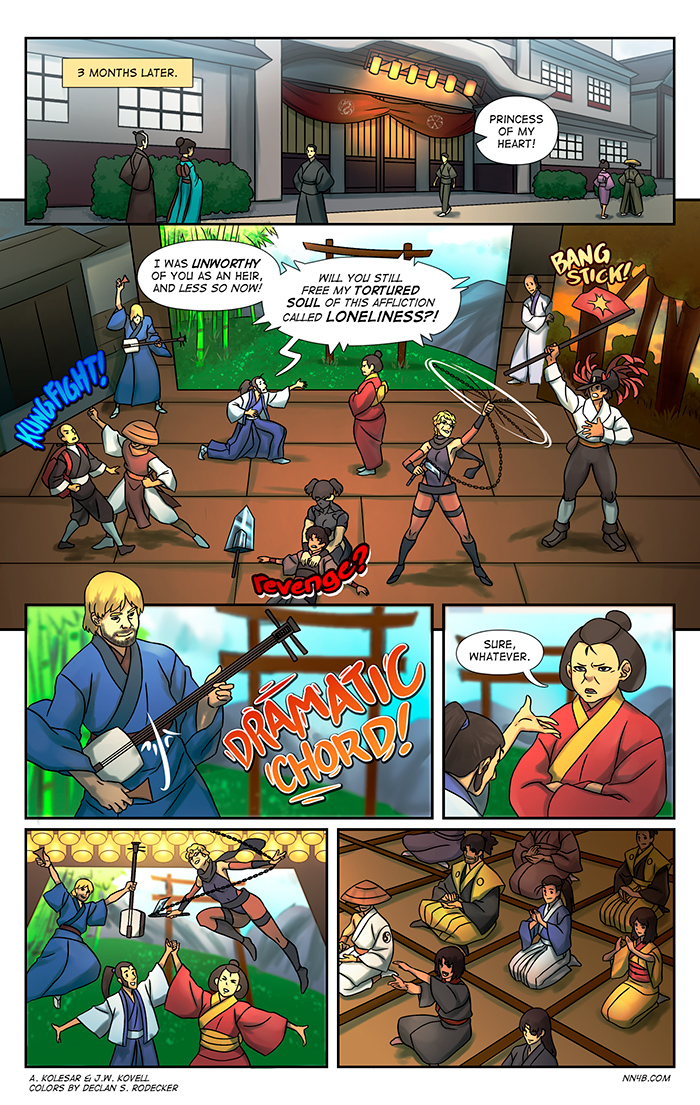