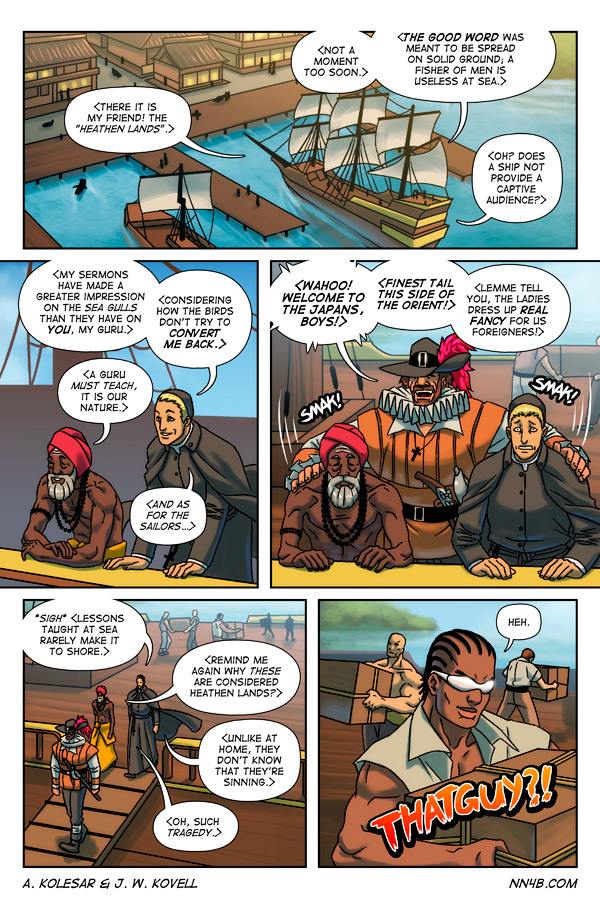 Panel 1. A Portuguese ship is docked at a harbor.

MANUEL (OP):
Not a Moment too soon. The good word was meant to be spread on solid ground; A fisher of men is useless at sea.

VASU (OP):
Oh? Does a ship not provide a captive audience?

Panel 2. Vasu and Manuel are looking out over the edge of the boat.

MANUEL:
My sermons have made a greater impression on the sea gulls than they have on you, my guru. Considering how the birds don’t try to convert me back.

VASU:
A Guru must teach, it is our nature.

Panel 3. Ricardo approaches Vasu and Manuel from behind and rests his hands on their shoulders.

RICARDO:
Wahoo! Welcome to the Japans boys! Finest tail this side of the orient! Lemme tell you, the ladies dress up real fancy for us foreigners!

Panel 4. Ricardo, Vasu, and Manuel deboard the ship while sailors in the background move cargo.

VASU:
Remind me again why these are considered the heathen lands?

MANUEL:
Unlike at home, they don’t know that they’re sinning.

Panel 5. Lex, disguised as a sailer, is moving a crate while overhearing the conversation.

LOOK AT ALL THESE NEW CHARACTERS! We’ll be spending a little bit of time with them before getting back to the main cast. I know it’s been a year of waiting to find out what happens next with Yori and Co, but we’d long planned on the introduction of these characters at this point in the story!

Captain Ricardo Bartello is  very boisterous guy who’s heavily influenced by John Rhys Davies’ character from the Shogun miniseries. In fact, the outfits for the Portugese characters are all inspired by the costume designs from Shogun.

It was Joe’s idea of having the Christian priest, Manuel Alvarez, and the Hindu Guru, Vasu Nair, always trying to convert each other to their own religion. Brilliance, I thought!

Also, waaaait a second, I recall a prophecy involving a Christian Priest, Hindu Guru, and Blind Taoist Monk from somewhere… 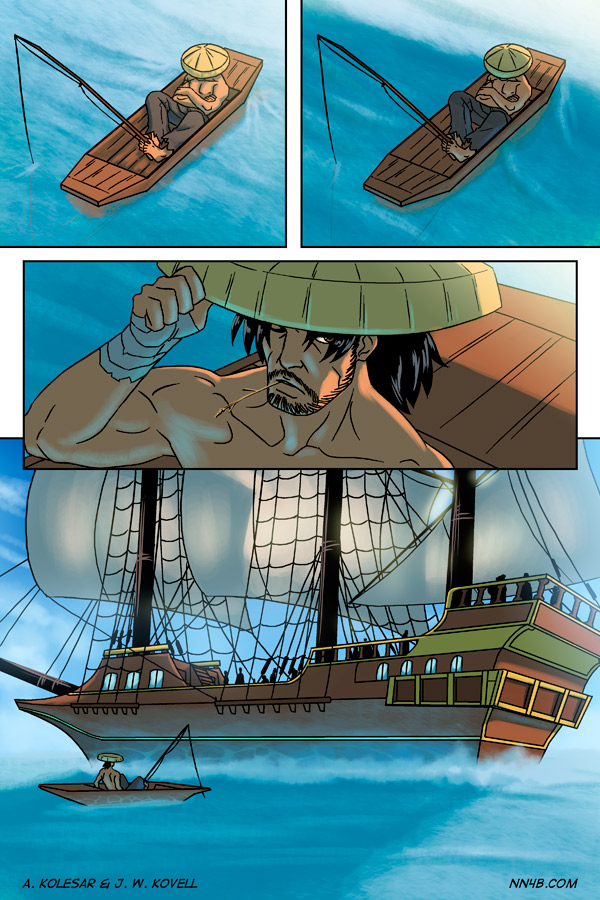