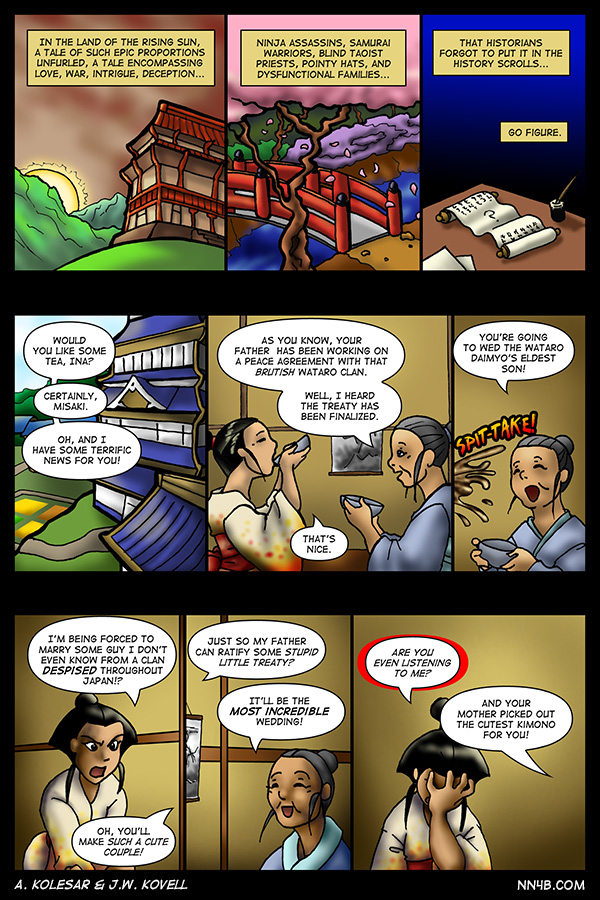 Panel 1. Japanese castle with a sunset in the background.

CAPTION:
In the land of the rising sun, a tale of such epic proportions unfurled. A tale encompassing love, war, intrigue, deception…

Panel 3. A large scroll with a question mark written upon it.

CAPTION:
that historians forgot to put it in the history scrolls…

MISAKI (OP):
Oh, and I have some terrific news for you!

Panel 5. A small room inside Senshin castle Ina and Misaki and sitting down. Ina is drinking from a tea bowl.

MISAKI:
As you know, your father has been working on a peace agreement with that brutish Wataro clan. Well, they finally reached an agreement.

Panel 6. Closeup of Misaki. A splash from an off-panel spit-take is show from Ina’s direction.

INA:
I’m being forced to marry some guy I don’t even know from a clan despised throughout Japan?!

MISAKI (OP):
Oh, and you’ll make such a cute couple!

INA (OP):
Just so my father can ratify some stupid peace treaty?

MISAKI:
It’ll be the most incredible wedding!

Panel 9. Closeup of Ina with her hand covering her face in frustration.

INA:
Are you even listening to me?

MISAKI (OP):
And your mother picked out the cutest kimono for you!