So I was deathly ill this weekend, possibly a 24 hour stomach flu. Either way, I’ve mostly recovered at this point, but it severely incapacitated my comic making abilities! Luckily, I was able to convince Joe to make a remix page in lieu of an actual update, something I’m only ever able to do when at death’s door. I hope everyone appreciated that I nearly died to make this happen!

On a side note, I did manage to fully beat that Nioh demo before it got taken off PSN. Not gonna lie, I got super frustrated trying to beat that big lightening chimera, but when I finally did it felt oh so sweet! Then I found this video of some player beating the same boss using a level 1 character with no armor and only a basic sword equipped. Well, gooood for yooouuuuu.

How bout that Game of Thrones Season 6? I feel like they’re trying to brush season 5 under the rug considering how sloppy it felt. 6 is killing it so far, the big payoffs all feel like they’re starting to roll in! Honestly, going past the books might be the best thing that’s every happened to the show.

I haven’t seen Civil War yet, but I’m sure by next update I’ll have plenty of thoughts on it. I know how much everyone loves reading my musings on comic book movies! (or movies in general, I guess)

Who Wore it best? 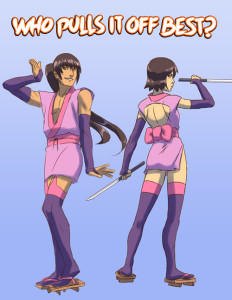 OKAY, we are now officially beating a dead horse, but I do so love my mutilated equine carcasses! Also, Joe’s trying out a new voting plugin! I see so many brilliant applications for this in the future. ANYway, it’s been theorized that Ina holds a grudge against Yorikiro for stealing her place in the Kabuki play, and she now finds any chance to insult Yori about his ability to pull of feminine attire (this in a country where all the guys wear dresses anyway!). The question is, who pulls off that pink ninja outfit from page 519 better, Ina or Yori? Vote! Or not! It’s not as if anyone has any stake in the results, anyway!

The first NN4B Remix wasted no time in establishing alternate universe Ken’s propensity for verbose pontification. I wonder where he got that trait…

Welcome back, Bushido readers, the new site is live! Be aware we’re still working out the kinks, but I think you’ll notice the much streamlined layout. No more main page to get to the archive, now you’re there immediately! You may also notice that reading through the archive is MUCH faster, and you can use your arrows keys to navigate back and forwards!

Joe will be posting the NN4B Remix pages one a day until they’re all up in the new Remix archive. We’ve also posted various extra content pages, including the 9 page story recap we just finished yesterday, in the Bonus Content archive. These can be accessed through the ‘Extras’ link at the top of the page. We’ll eventually have a home archive page to more easily navigate the various bonus pages and main archive. At the moment, browsing the archive is mostly a ‘straight forward or back’ affair. Stick with us as we implement more features!

As for the actual STORY, we’re going to be introducing all sorts of new/old characters/problems right off that will become quite significant later down the line! But worry not, we’ll be back to the main cast soon enough. You’ve all waited a year, so a couple more weeks to find out what’s going on with Yori and Co. is no big deal, right? Updates will now be happening every MONDAY AND THURSDAY so the next page will be up on the 19th. Look forward to it!

Published on March 30, 2013 by admin | No Comments on Characters