Alex and I joined the Canned Air Podcast to talk about comics and the NN4B Kickstarter campaign!

Basically, it was awesome!

Published on January 2, 2015 by Joseph Kovell | No Comments on NN4B on Canned Air Podcast!

The KickStarter is still on target to meet our goal, but I’m a greedy jerk and want more. More!

Thanks to everyone who has already backed our project. We’re working really hard on getting this book ready to meet our promised deadline, and we are cutting no corners in making sure it’s a book we can be proud of! Spread the word, get more comics!

That Genchu is a sentimental softy. The small tablet with the Daisuke Red Dragon symbol on it is a spirit tablet.

We’ve posted a new page to the Extras section to NN4B: Bushido Bards. On this page we are slowly collecting some of the many song-based reader contributions to NN4B. We’ve only just started, but check it out!

Work on prepping NN4B Voulme 2 for print continues. The book is going to be somewhere between 200 and 300 pages! I can’t really give an accurate estimate yet because we have quite a few “pages” online that will have to become 2 or 3 pages once they’re formatted for print.

We’re working really hard on improving these pages as we go. We’re adding bubbles, improving the sound effects (not yet complete on this page), updating the panel layout, and revisiting the dialog itself.

Here’s a side-by-side comparison of the first page of volume 2. I think you’ll see, it’s quite an improvement over the old version from nearly a decade ago! 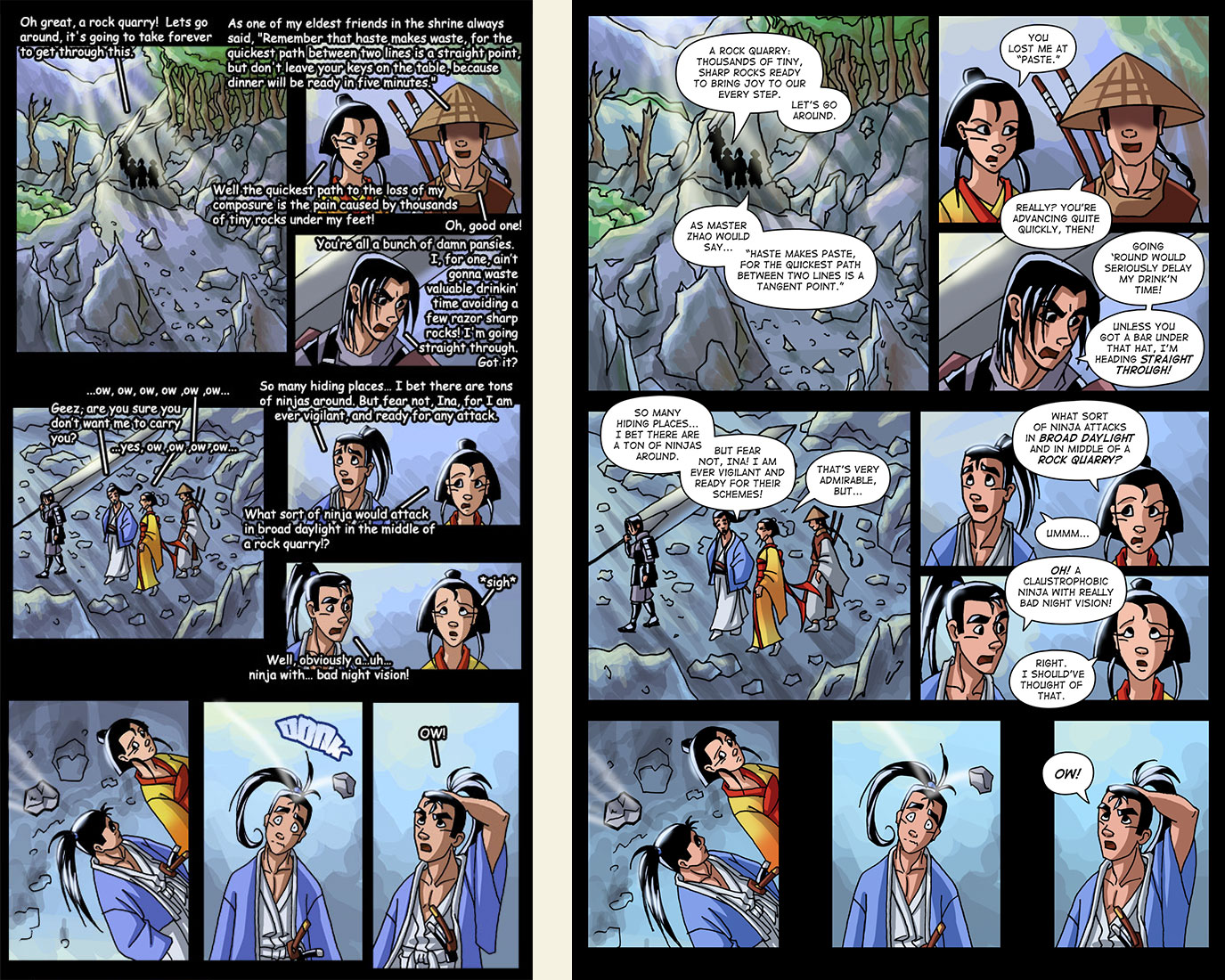 No Need for Bushido has a talented following gifted with repurposing existing songs for the glory of NN4B. Below is a collection of just a few of these wonderful works!

This is a triumph
I’m making a note here:
Huge success
It’s hard to overstate my satisfaction

But there’s no sense crying over every sword fight
You just keep on swinging with all o your might
And the killing gets done
‘Till the clan falls to the son
For Wataros who are still alive!

== And in a separate contribution ==

In power and money born and raised
In the dojo is where I spent most of my days
Genchu had me trainin’, gainin’ some skills
While my dad went out to reap a lot of plunder and kills
Then he exiled Genchu for changing his side
And I learned of a plot for a groom and a bride
While the daimyo sent out all the Demons of Sorrow
I ran away from home and Hirotomo Wataro

I rolled into the village about seven or eight
And I yelled to a soldier, “Yo, homes, hold the gate”
Ran into the three remaining Demons of Sorrow
It’s the price of being the ex-prince of Wataro

I like big swords and I cannot lie
You samurai can’t deny
That when a ronin pulls out a twelve-foot sword
You think he’s out of his gourd
You should run: the fight’s already done
‘Cause you notice that sword’s insane
It can send your friends all flying
Just listen to the dead and dying
Don’t run; I just wanna play games
Kick butt and take names
Don’t listen to ’em try to warn ya
That they’re all about to mourn ya
Red Dragon Zanbatou
You’ve never heard it swung before?
A big boom, after a swoosh
‘Cause I’m here to play Nuclear Kadoosh!
I’ve seen them drinkin’
To hell with deep thinkin’
Ooh, rice wine
Your sake’s about to be mine
It’s kind of like my fuel
And I’m not especially cruel
But when I’m running short on my favorite brew
I’ll take what I need from you
So, ronin! (Yeah!) Ronin! (Yeah!)
Is your shord shorter than you? (Um, yeah …)
Get a bigger one! (Well …) Or else! (Okay!)
Get a big, fat sword!
Baby got blade!

– Prepare for clones
– In residential zones!
– To protect the clan from humiliation!
– To subdue all peoples within our nation!
– To denounce Genchu and the pupils thereof!
– To shoot fake arrows from above!
– Uso!
– Uso!
– Team Uso, shoot him at the speed of light!
– Yori will never win this fight.
(Uso! That’s right.)

You walked into the village
And you were disguised as someone hot
Your hair strategically covering your eyes
To further your evil plot
You had one eye that was swirly for
The victim of your shot
Yorikiro dreamed that you were the princess
You were the princess, and

You shot him several hours ago
When he was still unaware
You noticed that they made such a pretty match
And divined they were a pair
Your illusion failed eventually
But that hypnotic glare
Made Yori dream you were clones, by the Kami
Clones, by the Kami, and

Uso vain
You prob’ly think that Yori won’t rout you
Uso vain
I’ll bet you think this comic’s about you
Don’t you? Don’t you?

Uso vain
The audience is starting to doubt you
Uso vain
I’ll bet you think this comic’s about you
Don’t you? Don’t you?

You come over unannounced
Dressed up like you’re somethin’ else
Where you are ain’t where it’s at
You see you’re making me laugh out
When you strike your pose
Take off all your Ninja clothes
You know you’re not fooling anyone
When you’ve become…
Somebody else ’round everyone else
You’re watchin’ your back like you can’t relax
You’re tryin’ to be cool
You look like a fool to me
Tell me!!!…..
Why do you have to go and make our plot so complicated?

My Sensei done told me! when i was a white belt!
A Daimyo’s gonna peace talk! and give you a good wife!
But when that peace talk is done….

A Daimyo is a two-face!
A worrisome thing who’ll leave you sing Kabuki in the night!

Now the priests with guns are ‘coming!
Hear the drums of war a calling!
Whooeee!!!
My Sensei done told me!
A Daimyo is a two-face!

it was a Teenage Fedual Japanese Wedding and the old folks wished them well!!!
You could see that the Wataro did truly loved the Senshin girl quite well!
Now the young monsieur and madame have rung the Shinto bell
“セ・ラ・ビ”, say the old folks It goes to show you never can tell!!!

They bought a souped-up Carriage
’twas a cherry red 1753

They drove it down to Osaka

To celebrate the anniversary

It was there that the Wataro was married

To the lovely Senshin he loved so well
“セ・ラ・ビ”, say the old folks It goes to show you never can tell!!!

Spooky, scary skeletons
speak with such a screech
You’ll shake and shudder in surprise
when you hear these Daisuke shriek

We’re so sorry, Kenta-Kun
You’re so misunderstood
You only want to drink sake
And maybe just break some wood!

‘Cause Spooky, scary Skella-Daisuke
shout startling, shrilly screams
They’ll sneak from their sarcophagus
and just won’t leave you be

If you like Killing Wataro! and getting caught in the rain!
If you’re not into yoga, if you have half a brain!
If you like robbing bystanders at midnight while wearing a mask and a cape
Then I’m the Daisuke that you’ve looked for! write to me and escape!

Published on August 31, 2014 by Joseph Kovell | 7 Comments on Bushido Bards

Published on July 12, 2014 by Joseph Kovell | No Comments on Comictron

Patience, new reader. It will all make sense shortly. Welcome to No Need for Bushido (or NN4B for those who dislike typing) a long running webcomic that takes place in Feudal Japan, sort of. Sticklers for historical accuracy will need to leave their encyclopedic knowledge at the door.

Very long running. NN4B has been published online for over a decade and is still going.

It would be foolish to attempt to create a well-crafted summary that could briefly and accurately convey the complex interwoven stories that make up NN4B. So here’s a poorly crafted one in comic form that we published shortly after the comic’s return from a short hiatus. 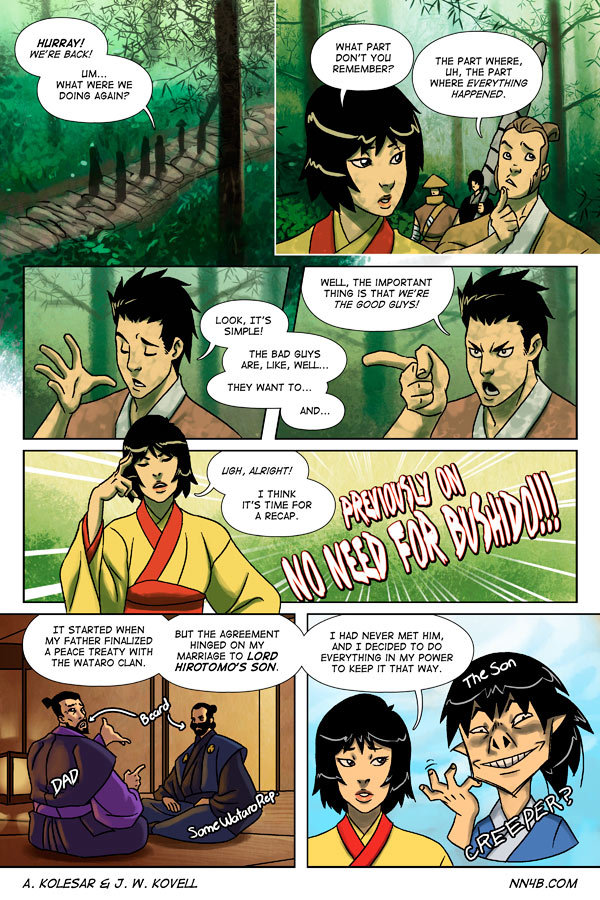 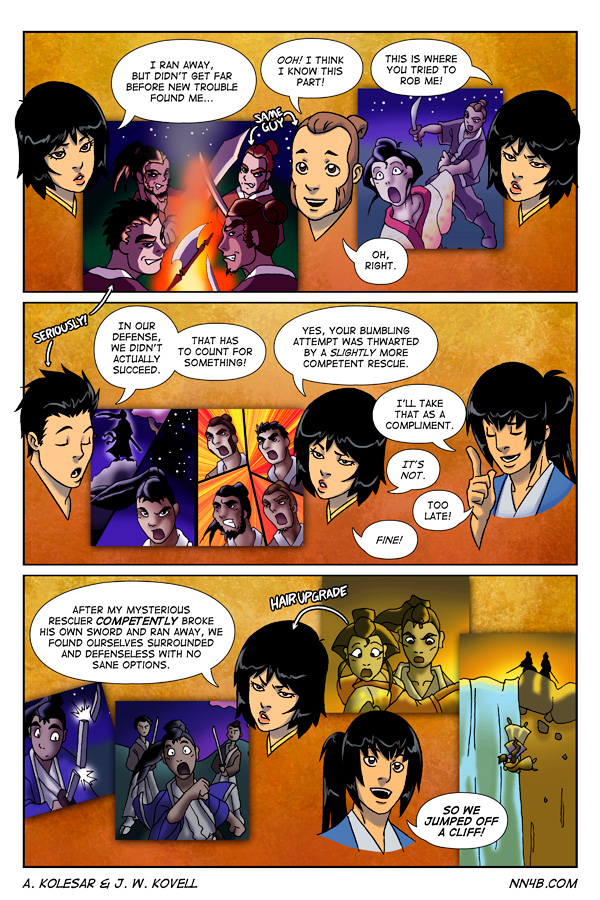 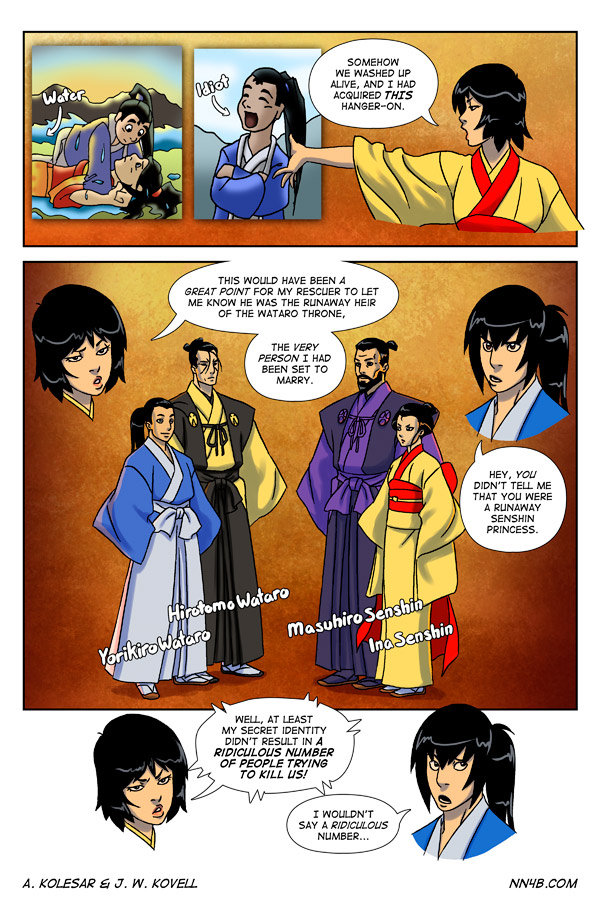 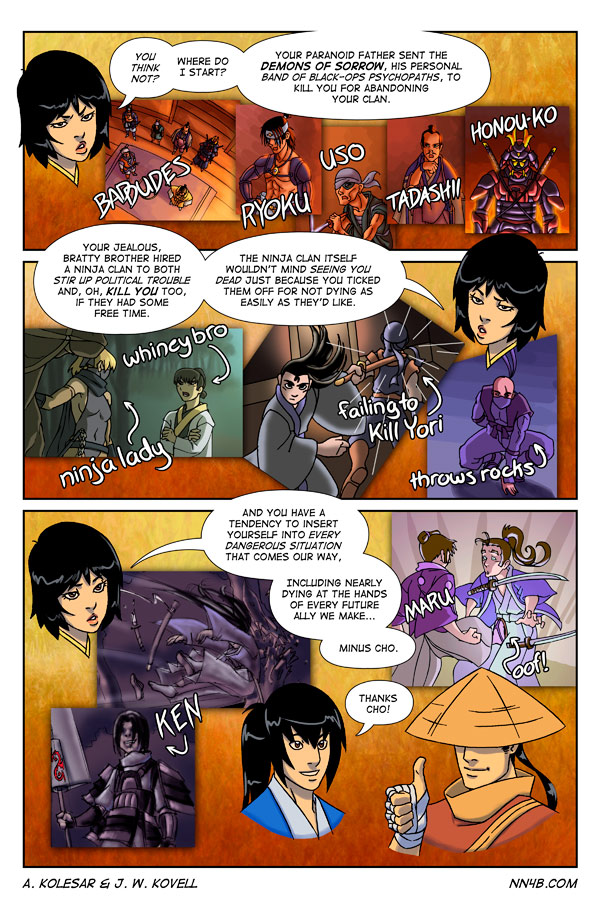 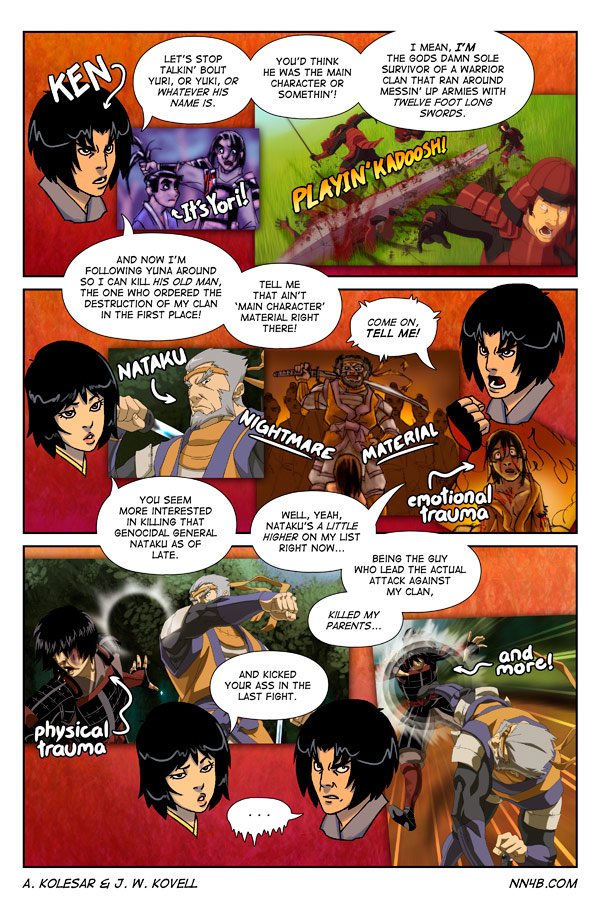 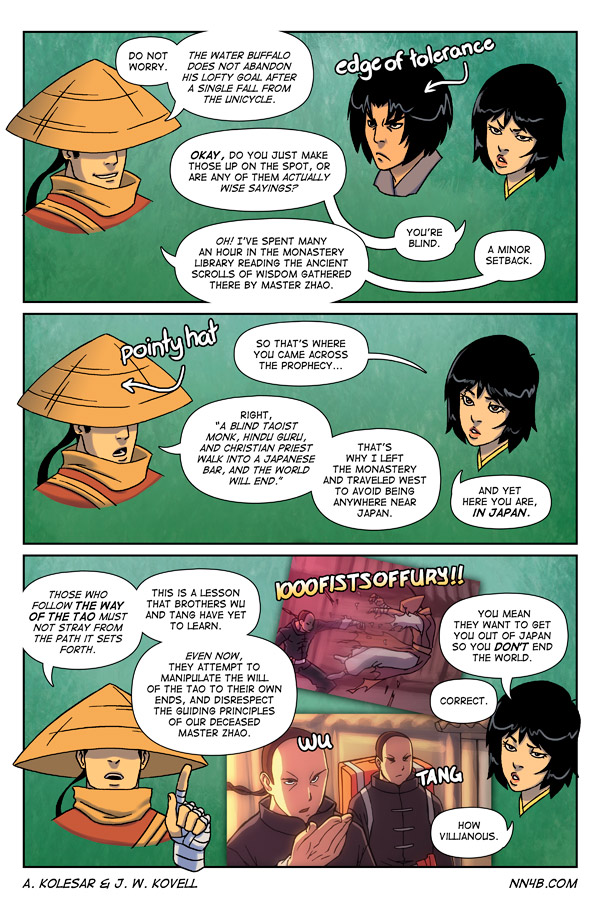 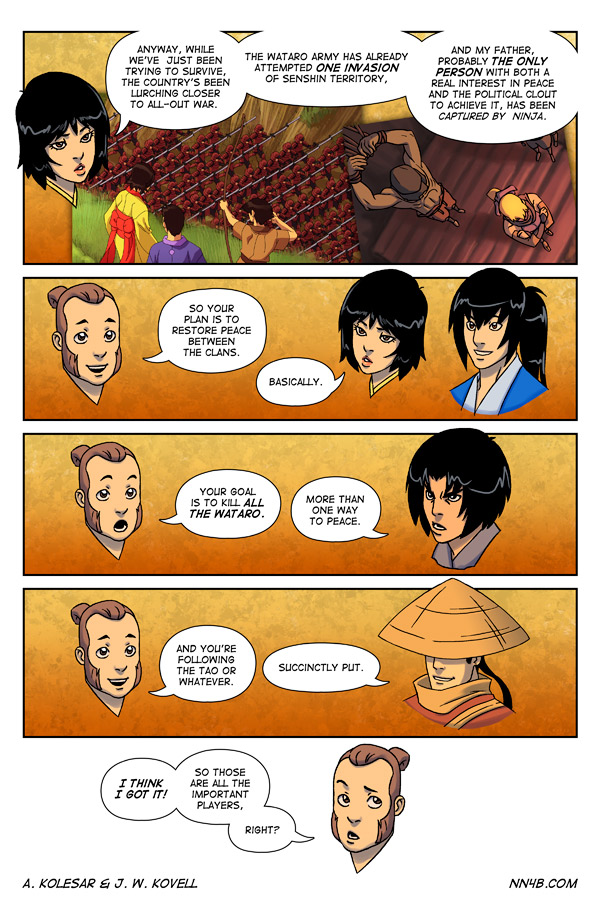 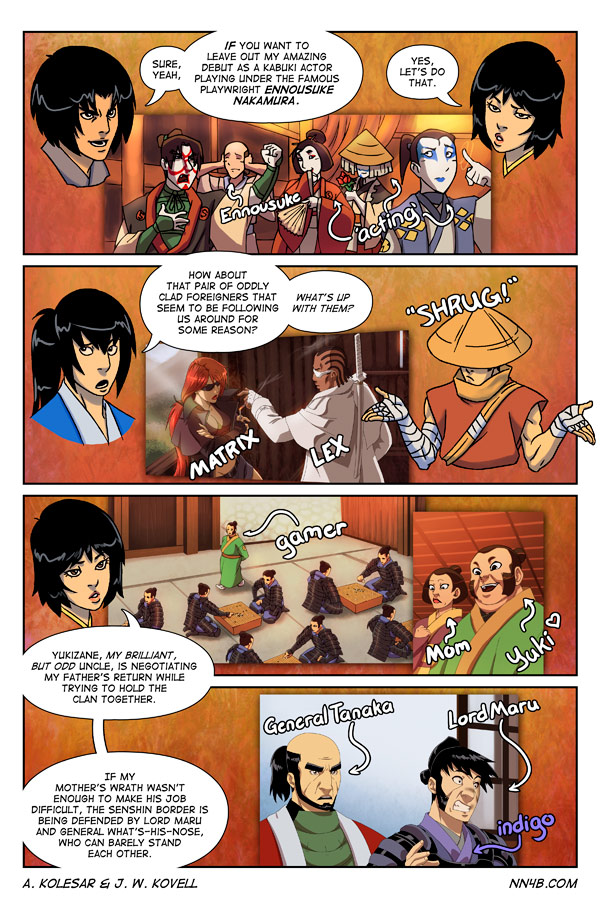 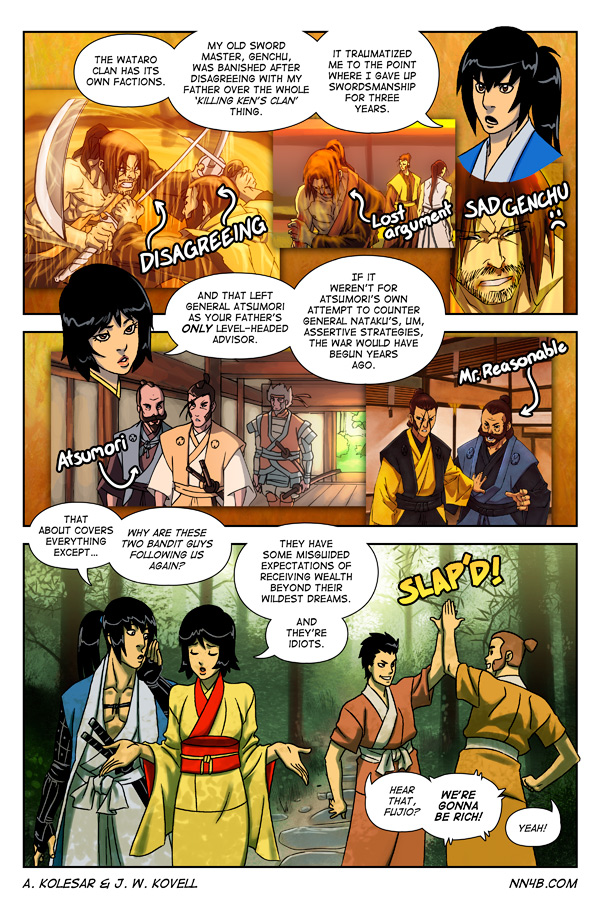 This is because they are very old. Fortunately, it’s not necessary to read the entire archive to catch up. We recommend that readers interested in skipping the old stuff begin with the chapter The Foreigners. Completionists should start from the very beginning.

It’s that sort of half-hearted hustling that got Ryoushi cut from the team! The Demons of Sorrow are all about collateral damage, keep firing!

I’m not sure yet if Yori’s hand thinks it’s a 90’s surfer dude or a Teenage Mutant Ninja Turtle. In the end… is there a difference?

For a bit of context: this remix came out shortly after the release of Avatar (the non-airbender one). Little did I suspect that Lex’s absurd suggestion of a Phantom Menace 3-D rerelease would become a reality in only a few years.