How to Train Your Dragon 2 Is Good, BUT… 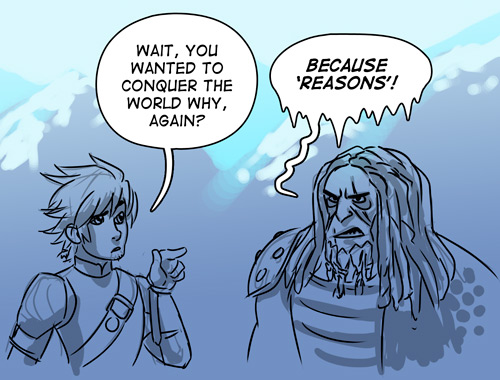 I saw How to Train Your Dragon 2 yesterday, and although my initial impression was that I enjoyed it more than the first film, the more I thought about it, the more frustrated I became with several elements. So now I’m going to dump out my thoughts on HTTYD2, the sequel to a movie that I think is one of Dreamworks animation’s two masterpieces (the other being Kung Fu Panda). It’s going to read very negative, but I just want to put a disclaimer that I did dig this film, and it’s absolutely worth seeing! Also SPOILERS.

I’ll start with what I loved about the movie. Its first half is expertly paced. For the first hour, they elegantly reintroduce the main characters and their personalities and then slide into the set up for mysterious off screen conflict that had me completely engaged. The introduction of Valka, Hiccup’s mother, was emotionally powerful, and I was incredibly eager to find out more about her history. I also loved the movie’s visuals. The aged up character looks crazy cool, and basically all the cinematography is on an epic scale. The soundtrack is swelling and heroic, and although I want to fault John Powell for overusing the main theme, it is SUCH A GREAT MAIN THEME, so I can’t be that down on it. But then the movie starts answering questions to all the mysteries it’s set up, and things begin to get muddled. They don’t exactly fall apart but we’re never given definitive explanations for a lot of what transpires.

Valka quickly becomes a bewildering character. Why did she never return home? She says she tried to convince everyone in Berk, many times before she was dragon-napped, to stop fighting dragons. She then says she didn’t think she could ever change anyone’s mind about the peaceful nature of dragons if she returned after she was taken. WHAT?? That’s like an alien abductee suddenly being best buds with a peaceful alien civilization that she can leave and come back to anytime she wants, but she doesn’t think bringing a friend to see the alien civilization will be a convincing argument for its existence! Seriously, lady, bring me to your alien civilization and I will, at the very least, strongly consider believing its existence is possible. She also says she thought her family would be better off without her, although she gives no explanation as to why.

She then claims that after she was carried off by a dragon and discovered how great and peaceful dragons were, she decided to help protect them from the film’s villain, Drago Bludvist,  instead of returning home. Well that might be a good reason not to return home, but it also raises a number of questions as to the relationship between Valka and Bludvist. Has this Bludvist guy been terrorizing dragons for the past 20 years? And over the past five years how has this group of dragon hunters not come across or been lead straight to Berk? The movie is kind of vague as to whether or not Bludvist is a returning threat from a previous generation or if he’s been doing his evil ‘capture dragons’ thing for 20 years, but if Valka’s been tending the dragons for all that time, then  one would assume he’s been actively hunting them for the same length.

To explain Valka’s 20 year absence better, I could put together a plausible scenario where Valka fell in love with her new dragon friends very quickly, saw the damage being done to them by Bludvist, and decided helping them was a more necessary cause to focus on than returning home and raising her child. I could see how she would feel very guilty about that decision, which would explain why she’s so concerned about what Stoick may think of her when they meet up after twenty years. But this all requires a lot of mental arithmetic to piece together and is not clearly stated or depicted in the film. Maybe this is all a minor gripe, but a simple line of Valka stating to Hiccup “I wanted to come home, to be with you, but keeping the dragons safe from Bludvist was too important to me, and I knew your father would raise you well,” would have clarified it all and left me feeling a lot more satisfied with her backstory. And then, of course, after she reconnects with Stoick she’s given virtually nothing to do for the rest of the movie!!Now THAT’S frustrating! In the end, her character is wildly under utilized and seems to have no other purpose than to make Stoick’s death more tragic and show where Hiccup gets all his dragon training abilities from (which is genetic now, I guess, maybe).

Also, both Bludvist and Valka can seemingly control two alpha dragons, but it’s never stated how they both know how to do this. It’s implied they’re both using the same type of staff that they wag around in the air, but where did they get the staffs? How do they each have one? It feels like they should have more of history together than is ever stated. If she’d had any history with Bludvist, then I would’ve liked to see him acknowledge her, or exchange some dialog with her when they briefly face off to tie them together more.

So when I really get down to it, my main problem with this film is Drago Bludvist. He feels as though he should be the unifying keystone of this film, the character that brings the three major plot threads together. Those three threads are: Hiccup meeting his mother, Hiccup deciding to be the new village chief, and Bludvist’s desire to conquer the world. And, to his credit, he does do that, but it doesn’t quite come together in as impactful and satisfying a conclusion as the first film’s finale. I’m mostly disappointed at Bludvist’s lack of a back story and unclear motivation. We’re told that he wants to fight the dragon menace, but that he controls dragons, and he wants to fight dragons with dragons. But then Hiccup surmises that Bludvist just wants to conquer and subjugate people, at which point Bludvist reveals he lost an arm to a dragon attack at some point, thus showing how dragons deserve to be controlled? And that’s his motivation? He’s basically a one note villain who wants to conquer the world because ‘reasons’, and instead of being a close minded counterpoint to Hiccup’s liberal open mindedness, he ends up being just some bad guy with an ability to make dragons listen to him.

I wanted Hiccup to change Drago’s mind about his own motivations, because that’s kind of Hiccup’s thing. I wanted him to piece together how to get this stubborn jerk to be less of a jerk through logic and evidence and reason. But since Bludvist’s motivations are so vague, there’s no counterpoint Hiccup can present that could ever change Drago’s mind. You have to know someone’s point of view before you can even hope to change it. This kind of muddles the theme of the film, which I’m still unsure of. I feel like the series’ first film was based on the theme of open mindedness and seeing from other points of view, and I’m not really sure the second film needed a new theme, just to present the old one in a new way. While the first film is more about being open to new experiences, and overcoming unwarranted fears perpetuated by heresy, the second film could’ve been about letting go of conflict perpetuated by justifiable hate. It could’ve been about letting go of anger that’s actually warranted to stop perpetuated violence.

If, despite Stoick’s death, Hiccup had still pushed for Drago Bludvist to change his ways, had even beaten him in combat and, as Drago lay under Hiccup’s boot, Hiccup had continued to argue for the end of conflict without further bloodshed, that would’ve been far more powerful to me. Instead, the film’s message almost comes off as “Sometimes you just need to fight people who don’t believe in what you believe in!” Sometimes that may be a legitimate message, but I feel like this series isn’t the one that should be delivering it.

Stoick’s death is very sudden and Hiccup recovers from it extremely quickly. The music barely had time to get sad for the viking funeral before it was back to being soaring and hopeful again!

The side characters did nothing of consequence for the most part, other than establish a running gag concerning Ruffnut’s romantic non relationship with nearly every boy in the movie, which never pays off! (I did laugh at this quite a bit, in full disclosure)

Drago has a huge army in one scene, and then the next time we see him it’s GONE! Drago, you forgot to bring your army to Berk!!

The only character with a complete character arc is dragon trapper Eret, who finishes his arc just before the climax of the film, leaving him with nothing to do during the finale (just like everyone else).

Toothless murdered Hiccup’s dad!! I wish Stoick had survived but been incapacitated, and then, seeing how well Hiccup handled the crisis afterwards, could’ve run off with Valka to go travelling the world on a ‘greenpeace for dragons’ type mission, leaving Hiccup in charge of Berk. Then the happy couple could return with a dragon army or something in the sequel! BUT NO HE’S DEAD NOW SORRY.

Did Drago die at the end of the movie? Did he escape? Everything about this guy is vague, even his ultimate fate!

Watching the two Alphas battle it out in the background was super cool.

I dig that Fishlegs rides his dragon like it’s a Harley. I instantly liked him a whole lot more because of that. But then he never did anything in the whole movie!

There wasn’t a whole lot of dragon training going on in this movie!

I can’t wait for How to Train Your Dragon 3! (No, seriously, I still love this series!)